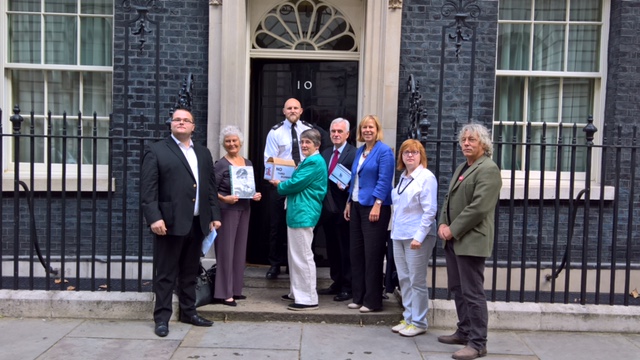 Residents who face losing their homes to make way for a third runway at Heathrow delivered 1,000 Petition cards to 10 Downing Street on Monday. Harmondsworth residents and anti-third runway campaigners were joined by Labour MPs john McDonnell and Ruth Cadbury, as the final decision approaches on airport expansion in the south-east. The petition cards were signed over two days at two local events in west London recently and called on Prime Minister Theresa May, who represents nearby Maidenhead, to oppose the expansion of the country’s largest airport. The visit to Downing Street sends a strong reminder to the Prime Minister that residents around Heathrow Airport are firmly opposed to its expansion – whether it is on the grounds of the destruction of thousands of homes, noise, pollution, costs to the taxpayer for the infrastructure or climate change.

Ruth Cadbury, MP for Brentford & Isleworth, said: “Even with new transport infrastructure, west London’s roads will grind to a halt with more congestion and of course more air pollution. I hope the Prime Minister recognises there has to be a balance and that she ensures Runway 3 goes no further.”

Jackie Clark-Basten, Chair of Stop Heathrow Expansion, said: “For Heathrow Villagers, the threat of expansion invades many aspects of life and almost every long-term decision. It is a myth that Heathrow has the money to compensate everyone affected and even if Heathrow airport had billions, how will money soothe those who stand to lose everything they hold dear?”

John McDonnell, MP for Hayes & Harlington, said: “Taking our campaign to the door on No. 10 is an important reminder to the Prime Minister of the destruction that would follow the construction of a 3rd runway. Theresa May now has the opportunity to demonstrate that her government will live up to David Cameron’s promise of “no ifs, no buts, no third runway” and that she has not been captured by the aviation corporates.”

The cards allowed signatories to indicate their reasons for opposing the proposed new runway, with reasons including pollution, noise, loss of homes, safety & security, costs of infrastructure and climate change. Percentages representing the number of respondents that ticked each reason are indicated below:

Stop Heathrow Expansion is a resident-led organisation that works to preserve the existence of areas around Heathrow Airport and the quality of life in areas beyond. It works in conjunction with other groups in the campaign against the third runway, including long-established anti-noise group HACAN.