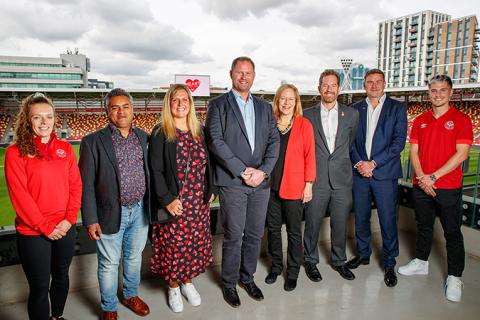 On Monday 3rd October Ruth Cadbury MP joined the launch of the ‘Heart of West London Group’ which has been formed to raise awareness of heart disease and to teach skills such as CPR. The group is made up of Brentford FC, Brentford FC Community Sports Trust, Royal Brompton and Harefield Hospitals Charity, Cardiac Risk in the Young, Resuscitation Council UK, Pablo London and A-K-A Day.

Speaking in full after attending the event Ruth said,

‘‘I was pleased to be able to attend the launch of the Heart of West London and to hear about the amazing work being done by so many different organisations to promote heart health locally. With over 20,000 people in Hounslow borough living with heart or circulatory diseases it’s so important that we work to raise awareness, promote screening and exercise, widen training in CPR for cardiac arrest, and provide support around heart health.

I had the chance to learn and practice CPR on a test dummy - performing CPR can more than double the chances of surviving a cardiac arrest and it’s such an important skill to learn.

Cardiac arrest among young people is an issue close to all our hearts in Brentford after Brentford FCs technical director Robert Rowan passed away at the age of 28 in 2018 from an undiagnosed heart condition. My son also lost a school friend in the same way. I will continue to work with organisations locally to raise awareness and ensure we make progress in improving cardiac health.’’