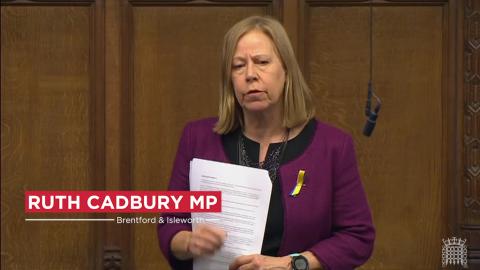 Responding to the Spring Statement delivered by the Chancellor Rishi Sunak, Ruth Cadbury MP has blasted the Chancellor for ‘once again failing to act’ and warned that the Chancellors statement failed to protect families when they most need support.

With energy prices skyrocketing and inflation now at over 6% Ruth warned that many families locally are feeling the pinch and called on the Government to do much more to ‘protect families’ at this difficult time. Ruth also called for the Government to introduce a windfall tax on oil and gas companies to tackle the high cost of energy bills.

Ruth also made sure to question the Chancellor in the House of Commons on Wednesday with a question highlighting the high costs of rents for many private sector tenants in West London, and the Governments failure to increase the amount of financial support provided for rent payments.

Speaking in full after the Chancellor’s spring statement Ruth said,

"I know from listening to families locally that the skyrocketing cost of energy bills and the rising cost of the food shop and weekly bills are all having a huge impact. The Governments own figures show that we’re going to see the biggest hit to incomes on record, with charities warning that over 500,000 people will be pushed into poverty.

Yesterday was a chance for the Government and the Chancellor to protect families but once again they are failing to provide much needed support for families who are feeling the pinch. All the Government have to offer is a tax hike- with national insurance rising this April, which will hit both workers and businesses locally with another tax hike. I’m extremely concerned that this budget will only deepen the existing inequalities in society and make it harder for families who are already struggling.

We needed to see targeted support to the most vulnerable people- but we didn’t see that from the Chancellor.

The Chancellor also failed to act on the rising cost of energy bills. I’ve called on the Chancellor to introduce a windfall tax on the oil and gas companies who’ve made record profits over the last year. This would pay for extra financial support to cover the energy costs for families and businesses at this difficult time.

I will continue to campaign both in Parliament and locally to urge the Chancellor to do more to support people at this extremely difficult time."