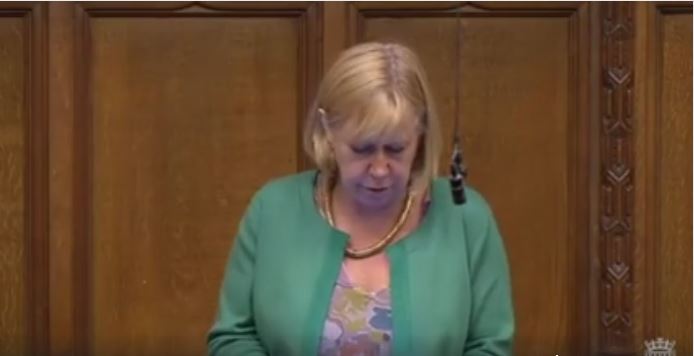 • Nothing in Queen’s Speech on Brexit that gives comfort on the single market or to EU citizens.

• “Parity of esteem” for mental and physical health actually means equality of austerity for all.

Ruth Cadbury, Labour MP for Brentford and Isleworth, has heavily criticised Conservative government plans laid out this week in the Queen’s speech.

Marking the formal start of the Parliamentary, the speech is given by the Queen but is written by the Government.  It sets out the government’s legislative and policy agenda for the forthcoming parliamentary year.

For the first time in nearly 100 years, the Queen’s speech was delayed, as Prime Minister Theresa May tries to finalise a deal with Northern Ireland’s DUP MPs to support her minority Tory Government.  The programme set out by the Queen, which she delivers from the Throne in the House of Lords, is debated by members of both houses over several days following the speech.  It will be voted on by MPs this week.

In another break with historical precedence, Theresa May also announced that there will not be a Queen’s Speech in 2018, so that Brexit laws can be fully debated, according to the government.

Ruth Cadbury, was re-elected in the snap General Election increasing her majority from under 500, to over 12,000

Speaking in Parliament in response to the Queen's speech she  highlighted her constituents’ concerns relating to Brexit, Heathrow expansion and the impact of austerity on education, the NHS, social care, public sector workers, housing, welfare and policing.  Along with many of her Labour colleagues, she pointed out that the programme outlined in the speech was more notable for what wasn’t mentioned in it, rather than for what it did contain.

“During the election campaign, the voters of Chiswick, Brentford, Isleworth, Osterley and Hounslow made it clear to me that they were voting for hope and for change. Many people voted Labour for the first time, and my majority increased from 465 two years ago to 12,148” , she said.

“They voted against a hard Brexit and against the ongoing austerity policies of the Government. Many people in my constituency work in London’s enormous finance and services sector. Many of my constituents are EU citizens, or are married to EU citizens, or work alongside EU citizens, or live near EU citizens, so they know directly and personally what leaving the single market will mean. They know that the single market is important to retain their jobs; to be assured that their employers can remain in London; to protect and build the UK economy; and to ensure that their EU spouses, neighbours and work colleagues have some security and the promise of a future. There is nothing in the Queen’s Speech that gives comfort on those issues.

“Many of my constituents told me that they wanted an end to austerity, because the NHS is going backwards, and there are still plans to cut major services at Charing Cross hospital. They can see how local services provided by Hounslow Council and the local voluntary sector have been devastated in the past seven years of cuts, so that Hounslow council has lost 40% of its income in that period.

“they see how cuts to community policing have decimated the neighbourhood police teams that make them feel safe in these challenging times.

“they have been denied adequate care services for themselves or for a loved one because of these cuts.

“People still working in the public sector want an end to austerity because after endless rounds of job cuts they are failing to do properly the work of the three or four posts that they are trying to cover.

“We need an end to austerity, which is a discredited ideology in all equivalent countries that not only decimates the public sector but exacerbates inequality and, incidentally, weakens the economy.

“During the election, young people told me that they wanted an end to tuition fees that are saddling them with massive debts at the start of their working lives. They also said they wanted an end to exploitative zero-hours contracts, which are usually the only jobs they can get for years, whether they are graduates or not. It is not surprising that there is nothing in the Queen’s Speech for young people, given that we know from an article in The Economist that Conservative party central office apparently told local campaigners in my constituency, and presumably most others, not to worry about seeking young people’s votes because ‘They are not on the data set’.

“Parents and sixth formers told me that they wanted their good and excellent schools to continue to thrive, so mention of fair funding in the Queen’s Speech gives them no comfort that the planned future cuts, entitled “fairer funding”, are not going to go ahead.

“Those on average and low incomes told me about their problems in trying to find a home that they could afford to rent, let alone buy. There is nothing in the Queen’s Speech for people who need truly affordable housing. Those living or walking near our busy roads told me that they want robust legislation that addresses our appalling air quality that is so damaging to their health and that of their children—nothing about that in the Queen’s Speech either.

“People who will live under the inevitable approach path to Heathrow’s runway 3 and those living under the approach paths to existing runways, where respite periods will be cut, are all hoping that runway 3 will not go ahead, but the Queen’s Speech was surprisingly silent on Heathrow.

“There is nothing for the escalating number of people forced to rely on food banks caused by the cuts to the housing allowance and by housing benefit cuts and sanctions. In the last year, the number of users at Hounslow Community FoodBoxhas tripled as a result of the roll-out of universal credit by the Department for Work and Pensions across the borough of Hounslow. In my view, that is a legalised form of enforced destitution.

Commenting on the Prime Minister’s commitment outlined in the speech to end the “burning injustice’ of the treatment of people with mental health conditions, Ms Cadbury lauded this as a worthy aim, but she went on to say that it is completely worthless if no additional funding is available in the NHS.

“It is hypocritical to promise specialist staff support in schools when this year, heads have had to cut welfare support, counselling services and teaching assistants—the very people who were providing essential support to troubled children in our schools but whose posts are currently being whittled away under the current funding cuts.

“Concern for mental health in the Queen’s Speech, and from the Prime Minister, is worse than useless given that we read that the Department for Work and Pensions has been forced to reveal today that 200,000 people with chronic mental health conditions are set to lose their employment support allowance.

“Now we know that “parity of esteem” for mental and physical health actually means equality of austerity for all.

“Although my constituents will be pleased that there is no further mention of means-testing winter fuel payments, of boosting fracking, of reviving foxhunting, of the ending of infants’ free school meals or of the roll-out of grammar schools, there is much that they would like to have seen. The Prime Minister said today that she has put fairness at the heart of the Government’s programme, but the Queen’s Speech has done nothing of the sort. Today, the pageantry was scaled down, and so was the Queen’s Speech. I now hope, for the sake of my constituents, that the five-year term of this Government is also scaled right back.”

Prior to her comments on the Queen’s speech, Ms Cadbury began by saying sheshared the sympathy expressed by hon. Members to people who have been bereaved and injured, gratitude to the emergency services, and concern that theoutrages which took place after the dissolution of the previous parliamentary session, must not happen again.

To see the full text of this and all Ruth's other interventions in Parliament:  https://www.theyworkforyou.com/mp/25343/ruth_cadbury/brentford_and_isleworth