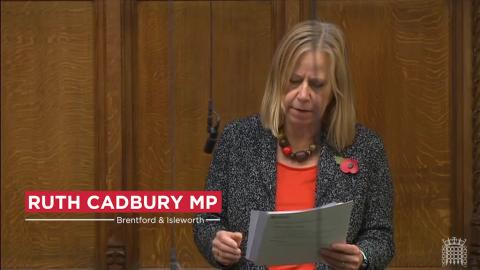 On Monday, Ruth Cadbury MP spoke during the debate on the Chancellor’s Budget and condemned the Chancellors budget as ‘yet more levelling down’, while accusing the Government of proceeding over a ‘lost decade’ of cuts to public services.

In her speech Ruth focused on the specific issue of further education funding and skills. Ruth lamented the Government’s lack of ambition and highlighted the years of funding cuts to sixth form and adult learning. Ruth spoke directly about the consequences locally in Hounslow and mentioned that local colleges such as West Thames will not have seen increases in funding per-student for over a decade.

Finishing her speech Ruth called on the Government to work directly with colleges and other further education institutes in order to develop the green skills and jobs needed to tackle the climate crisis.

‘‘With families locally facing rising food prices and surging energy bills this Budget was a chance for the Government to support people struggling to make ends meet.

Instead, we saw the Chancellor deliver a budget that was divorced from reality, with tax cuts for domestic flights and champagne and tax hikes for families locally with a rise in national insurance and council tax.

With the UK hosting the COP26 Climate conference we should have seen an announce an ambitious program to tackle the climate crisis- yet all we saw was the Chancellor cut taxes on domestic short haul flights- while doing nothing to improve our rail network in the UK.

This budget came after 11 long years of successive Governments cutting public services and refusing to invest in our economy. Despite the lofty rhetoric from the Chancellor this budget does not make up for the lost decade that so many people have faced.’’