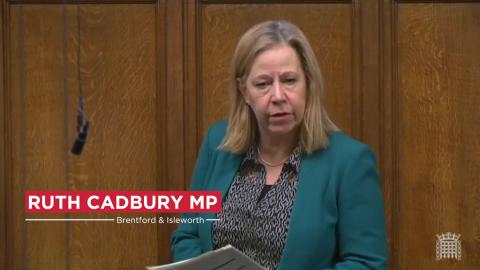 Ruth Cadbury has urged the Chancellor of the Exchequer Rishi Sunak to take urgent action after Ofgem announced yesterday that energy bills could rise by over £1,971 per year. Speaking in Parliament on Thursday 3rd February Ruth called on the Chancellor to introduce a windfall tax on energy companies such as Shell, who recently announced profits of nearly £20 billion. Ruth also criticised the Chancellor for presenting his new energy loans as ‘rebate or discount’ when customers will be forced to pay them back over 5 years. Speaking in full after her question Ruth said, ‘‘Today’s announcement from the Chancellor is far too timid and far too late to help families struggling rising cost of energy. It’s not fair that today’s announcement will see people waiting until October for a £200 loan, which they will then be forced to pay back. People locally can’t afford to wait over six months for a loan- they need urgent action today. The Chancellor’s statement also offered nothing for businesses, or schools, which are also faced with unaffordable energy bills. That’s why I have called on the Government to take urgent action by cutting VAT on energy bills- as the Prime Minister promised in 2016. On top of this the Government should expand the warm homes program to cover more families and ensure they have direct financial support. Additionally we need to see urgent action to insulate homes across the country, which would reduce bills and create well paid green jobs. This could be funded through a windfall tax on the energy producers who’ve made huge profits from the energy crisis. Previous Chancellors from both major parties have introduced windfall taxes in the past. I know how worried many people locally will be about this huge spike in prices and I will continue to campaign for the Government to do more to support people at this difficult time.’’
Tags
Parliament
Campaign & News tags
Parliament