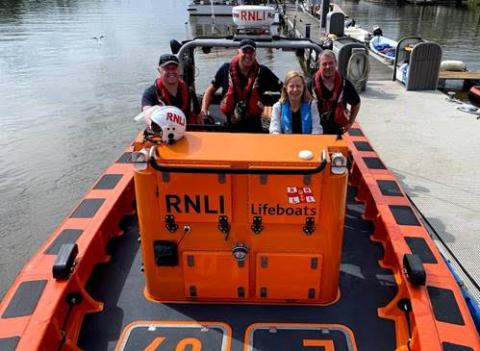 This week, Ruth Cadbury MP visited the local branch of RNLI in Chiswick to be briefed on the challenges they have faced over the last eighteen months, as well as to demonstrate her support for them in the face of undue criticism in recent weeks.

RNLI Chiswick is the second busiest of all the RNLI stations across Britain and Ireland, with Tower Bridge being the busiest. Both only came about after the Marchioness party boat tragedy in August 1989, the aftermath of which meant that in 2002 the RNLI set up four lifeboat stations on the Thames—at Gravesend, Tower Bridge, Chiswick and Teddington.

Given the tour by Wayne, the station manager, and a group of their volunteers, Ruth heard how the majority of their work is about protecting those who underestimate the dangers of the Thames or to rescue those attempting suicide.

After the visit Ruth said,

“Throughout the pandemic, I have kept in contact with RNLI Chiswick to support them and their volunteers during these testing times. Despite the important public service that the RNLI does, almost all their funds comes from charitable fundraising.

The recent attempts by the far-right to demonise the RNLI for carrying out lifesaving work was deeply immoral.

I was delighted to see the public’s response to the criticism, with the waves of donations made in the days following. I am incredibly grateful to our local RNLI and their volunteers for keeping West Londoners safe while on the Thames”.