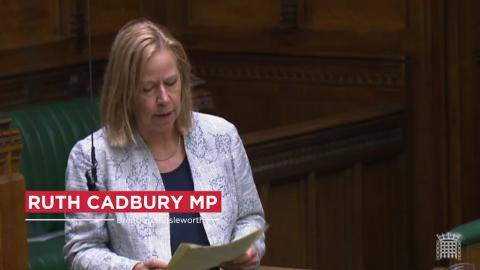 Last week, Ruth Cadbury MP voted against the Governments plans to cut £1,000 a year from Universal Credit for thousands of families in Hounslow.

Speaking in the debate Ruth labelled the cut as ‘cruel’ and warned that the cut would impact over 17,000 individuals in her constituency of Brentford and Isleworth alone. Almost 40% of those claiming Universal credit are in work, but earning low wages. Ruth also said that this cut represents over £15 million that would be lost from the local economy. Additionally her speech mentioned the impact that the decline in international travel has had on jobs at Heathrow and in the arts and cultural sector in London meaning more households than ever before are now dependent on Universal Credit to make ends meet.

‘‘It is simply cruel for the Government to cut £1,000 a week from thousands of families in Hounslow.

Nearly half of those claiming Universal Credit are in work, and this cut will have a devasting impact on their ability to pay the bills and feed their family. I know from the messages I’ve received from people locally that they are extremely worried about the impact that this cut will have.

At a time when energy bills, rent and food prices are rising, it is unthinkable for the Government to launch this attack on families locally. On top of this cut the Government are pushing through the National Insurance tax hike on working families and businesses.

I will continue to campaign against this deeply damaging cut to Universal Credit.’’