Ruth calls for urgent action by the Government to protect women from domestic abuse. 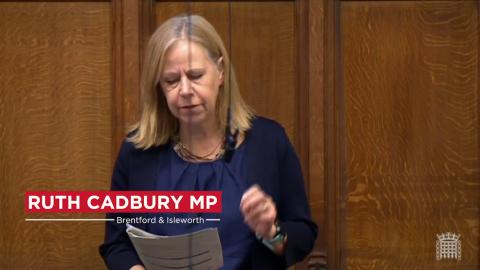 On Thursday 26th May Ruth Cadbury MP called for urgent action from the Government to ensure that public bodies such as the Police, the Crown Prosecution Service and the Probation Service work together to protect women from domestic abuse- especially from ex-partners. Speaking in the House of Commons in Attorney General Questions Ruth warned that she had seen a number of cases where the different organisations were working in ‘silos’, and were failing to protect victims.

‘‘It is vital that the Government play a central role in ensuring that public bodies work together to protect women from domestic violence and abuse, especially from former partners. I’ve been extremely concerned to see a number of occasions where various organisations are not working together - which means that victims are falling through the cracks and not getting the protection and support they need.

It was extremely disappointing that when I asked the Attorney General about this in Parliament she responded with an answer to a question I didn’t ask about a recent review into rape prosecutions, and then proceeded to make a party-political point, which is inappropriate behaviour for the Attorney General, who serves as a law officer in the Government.

This is not how they should approach these serious issues.’’