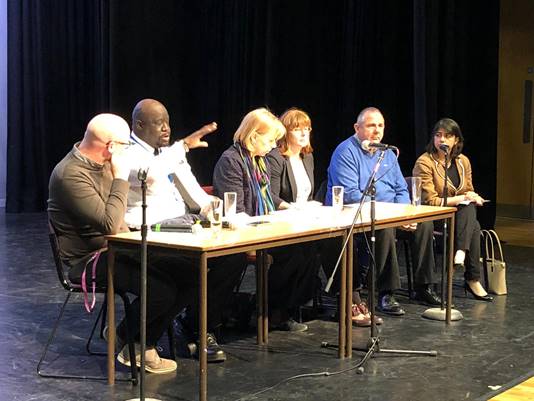 The event was held to allow residents to discuss crime in Isleworth, and to give their views on the causes, and solutions, whilst also asking questions to the panel on a range of subjects from youth crime, to drug dealing, to police numbers.

''It was great to chair this listening event on crime in Isleworth. I've had lots of constituents get in touch who are deeply concerned about crime recently, not just in Isleworth, but across Hounslow. This meeting was a good first step to hear residents' concerns, answer questions and address what we can do as a community. It was good to hear the views of young people, and local parents, who expressed concern about the pressures that young people are under, and the lack of support that they are provided with. There was a really strong desire in the room for everyone to get involved, and do as much as possible to tackle crime, and bring our community together after the recent tragic events, such as the fatal stabbing of a 17 year old in Isleworth. There was extremely high demand for this meeting, and judging by the level of interest, I hope there will be other meetings about local crime across the borough. I will also keep working in Parliament to raise issues such as police funding and youth service cuts, whilst pushing the government to take much bolder action against crime.''

The full recording of the public meeting can be found on Ruth's Facebook at- https://www.facebook.com/RuthCadburyMP/videos/630433744069223/