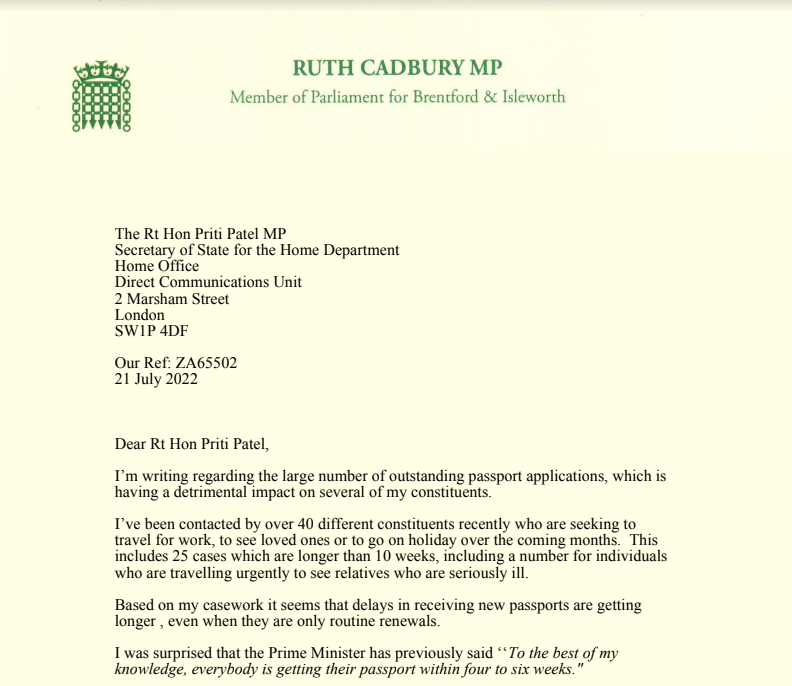 Ruth Cadbury MP has written directly to the Home Secretary Priti Patel to condemn the ongoing backlog of passport applications. In her letter she warned that these delays were having a detrimental impact on many people locally, many of whom were having to travel for work or to see loved ones abroad. Ruth told the Home Secretary about the large number of constituents who had contacted her saying they were still waiting for their passports, including 25 constituents who were waiting more than 10 weeks.

Yesterday it was announced that over 50,000 applications nationally had gone over a 10 week waiting period- despite a promise by the Prime Minister that cases would be resolved within four to six weeks.

Speaking in full after sending her letter Ruth said,

‘‘The Home Offices shambolic approach to the passport backlog has meant that many people locally are having to wait far too long to receive their passports. This is stopping people locally from being able to travel on holiday, travel for important work or in some heart-breaking cases, travel to see loved ones on their deathbed.

Despite repeated promises to fix this issue the Government are dithering and delaying and have still not recruited enough staff members. We’ve seen failure after failure from the Home Office on this issue and it’s simply not fair for my constituents who are facing long waits.

That’s why I’ve written directly to the Home Secretary to call for urgent action to tackle this backlog to ensure that people locally can travel this summer.’’