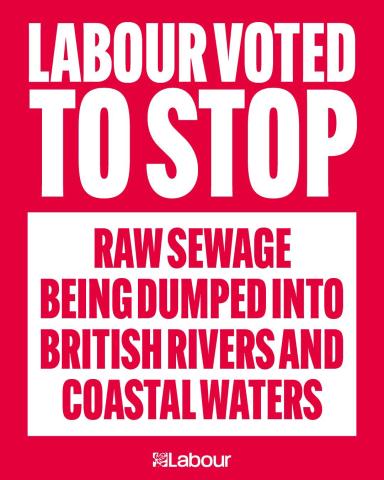 Ruth Cadbury MP has condemned the Government for their ‘decade of inaction’ over water pollution after new research showed that sewage was discharged into the Thames from Mogden Sewage works 43 times in 2021 alone.

The Rivers Trust Interactive Map which monitored storm overflow showed that in 2021 raw sewage was discharged for 438 hours. This data comes after the Government allowed water firms to continue sewage dumping and after Government MPs voted down an effort to amend to the Environment Bill last year which would have progressively eliminated sewage dumping into our natural environment.

A fortnight ago new research found that that on average water companies in England and Wales are pumping raw sewage into our natural environment every two-and-a-half minutes, with areas such as beaches, playing fields and bathing waters having faced 1,076 years-worth of raw sewage over a six-year period.

‘‘It is simply disgraceful that water companies are pumping raw sewage into waterways across the country, whether it’s into the Thames or into the sea. So many holidaymakers would have seen the signs at beaches this summer stopping them from swimming in the sea after vast amounts of sewage were dumped across our coast.

Locally we’ve seen diluted effluence from Mogden Sewage Treatment works pumped into the Thames when it rains heavily and last year we saw raw sewage flood into the Duke of Northumberland River in Isleworth due to the ageing infrastructure at Thames Waters’ Mogden works.

The Thames play a huge role in supporting wildlife and allowing people to take part in paddleboarding, rowing and other sports. Yet after 12 years in power it is clear that the Government have done nothing to stop private water companies from pumping rivers and waterways with diluted sewage. We have seen a decade of inaction from the Government.

Britain deserves better than this, and I will continue to campaign for tougher regulations on water companies.’’