Ruth hits the Government over the link between funding cuts and knife crime. 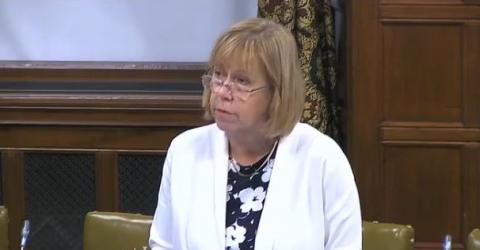 Following growing numbers of local knife crime incidents, Ruth Cadbury MP hit out at the Government during Prime Ministers Questions, over the continued cuts to public services, and highlighted the direct link to the increased levels of violent crime, especially knife crime, that have been targeted towards young people.

Speaking in the Chamber, Ruth told David Liddington, who was standing in for Theresa May that ''Teachers, Specialist children and youth workers, and others are warning that Government cuts are making it harder to protect young people from knife crime''.

Since 2010 the Government have cut funding for youth services by 70%, with schools facing a real terms funding cut of 8%. Likewise the Metropolitan Police have faced £1 billion in cuts, which in turn has meant there are 3,000 fewer police officers in London. Alongside these cuts, violent crime in England and Wales has risen by 18% in 2018.

Speaking after the debate, Ruth said ''In my latest crime survey I've had dozens of constituents tell me that the best way to protect young people from violent crime is to invest in vital prevention based services such as youth clubs, whilst ensuring our police officers have the funding they need to respond to crime when it occurs.

Teachers, and social workers are now warning that whilst they know which children are at-risk, they simply don't have the resources to protect them. This stems directly from the Government cutting real terms school funding by 8% since 2010.

Even Conservatives like Lord Seb Coe are now saying that there is a direct link between cuts to youth services, and violent crime. When I asked about this in Prime Ministers Questions, David Liddington gave a weak response which completely ignored that the Government have cut £880 million in youth services, whilst also imposing step cuts on frontline policing.

It's clear that the Government need to listen to teachers, youth workers, parents, and young people, and reinvest in our communities, to help tackle violent crime.''