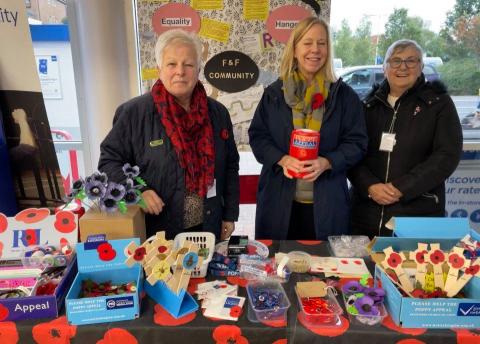 Ruth Cadbury MP hopes that Hounslow residents have the opportunity to pay tribute to the service of UK armed Forces, past and present, this Remembrance Sunday.

On Sunday, Ruth will be attending a Remembrance Service locally, while the Speaker of the House will plant the Brentford & Isleworth Remembrance Stake on Ruth’s behalf at College Green. The stake will be dedicated to the branches of the Royal British Legion (RBL) in Chiswick, Brentford, Isleworth and Hounslow to former Ghurkha Cllr Bishnu Gurung, Mayor of LB Hounslow 2021-2, who does so much to raise funds for Veterans Charities, and for ex-service personnel and their families, particularly in West London’s Gurkha community.

This week, communities across the borough will come together to thank local service men and women, veterans and their families for their incredible efforts helping to keep Britain safe and secure. From supporting the frontline response to the Covid crisis, to evacuating 15,000 people from Afghanistan in just two weeks, the UK’s servicemen and servicewomen continue to play a central role to support and protect British interests and values.

Following the launch of its national poppy appeal, the RBL are raising vital funds to support our armed forces communities. Ruth has already been out supporting local fundraising for the Poppy Appeal.

As the RBL marks its centenary, Labour is backing the charity’s efforts to encourage schools across the country to support the teaching of remembrance, to ensure the understanding of its importance is passed on to the next generation. The charity has developed a range of free teaching resources to be used in local schools or at home, with all of the lesson plans linked to the national curriculum for key stages 1-5.

“Just as they were over a century ago, our armed forces have shown this year just how indispensable they are to the nation’s security and wellbeing, from airlifting British Nationals out of Afghanistan, to driving NHS ambulances in Wales.

“Each town in Hounslow has an active branch of the Royal British Legion, and all support those who have been vital in the collective national effort in the last eighteen months.

“It’s vital we recognise their heroic efforts, so I hope Hounslow residents will mark this year’s remembrance by doing their bit, whether that’s supporting the local poppy appeal, or passing on the understanding of its importance to the next generation. We must honour and remember their sacrifice, whilst also remembering all victims of conflict.”