Ruth speaks out about violence against women and girls. 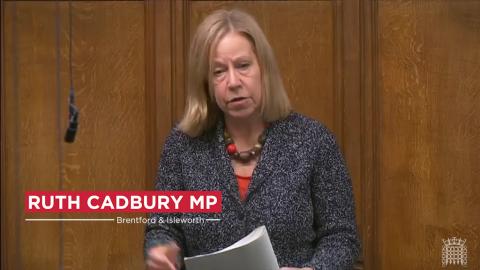 Speaking in the House of Commons last week on Wednesday 2nd March Ruth Cadbury MP warned that a lack of urgent action over violence against women and girls had seen progress made in previous decades being reversed, while also calling for urgent action to tackle this rise in violence nationally.

In her speech Ruth also mentioned the experiences of women locally who had been let down by the police, probation services and courts and said that public bodies were often not sharing information that would protect women at risk. Ruth also mentioned the need for stalking protection orders to be adequately enforced and said it was ‘‘pointless having them in place if they are not enforced.’’

‘‘I know from listening to women locally that acts of harassment and violence are sadly far too common. Whether it’s domestic abuse, acts of sexual violence or sexual harassment, or on-line abuse, I know that we need to do so much more to ensure that women and girls are safe.

In my speech I raised the need for urgent action by the Police, the probation service and the Crown Prosecution Service, along with the Government. A decade of Government funding cuts to key services has also had a huge impact on the support offered to victims.

I fear that without action we risk going backwards and women will not get the support they need. It’s particularity shocking that the prosecution rate for rape has dropped to just 1.3%.

This is appalling and shows the need for much further action from the Police, the Crown Prosecution Service and the Government. It is not enough to hear warm words from Government Ministers if women are unable to get the justice they deserve.’’