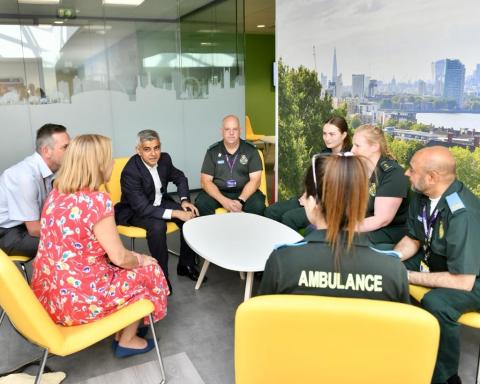 During the visit Ruth and the Mayor saw the new state of the art facilities in action and met with trainee crew members to hear about their experiences training. They saw one of the new fleet of electric ambulances that LAS has bought, along with one of the electric fast response motorbikes. They also had a chance to meet ambulance staff’s trade union representatives.

Speaking after the visit Ruth said,

‘‘It was great to attend this new training facility with the Mayor and to meet with ambulance crew members.’’

‘‘I got to hear about the London Ambulance Service’s ongoing work to keep Londoners safe and I know people locally really value the work done by ambulance crews at a time of significant challenge. I was really pleased to see the new facilities, including the electric vehicles that they have invested in.

I fully support their new recruitment campaign to recruit 1,000 new ambulance staff and would encourage anyone who is interested to apply - including those leaving school and college.’’

Commenting on his visit to the new Brentside Education Centre, the Mayor of London Sadiq Khan, said:

“I am absolutely delighted to officially open the Brentside Education Centre. I’ve seen first-hand the state-of-the-art technology being used to train new recruits, which provides the perfect platform for trainee paramedics and emergency call handlers to join the front-line and help save lives.

“A stronger, bigger London Ambulance Service is integral to supporting the wider NHS and ensuring that all Londoners are safe, healthy and well cared for. That is exactly why I’m backing the service’s most ambitious recruitment drive in its history and encouraging Londoners from all backgrounds to apply. It’s an opportunity to develop new skills and enter into a fulfilling career, making a difference for Londoners when they need it most. With this new cutting-edge training facility now officially open, there is no better time to join the London Ambulance Service.”