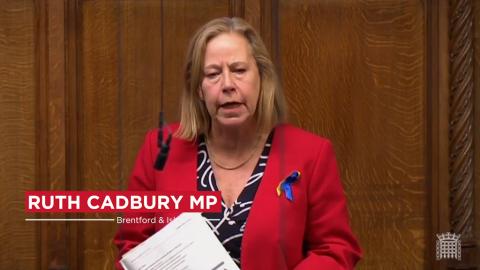 On Monday 5th July Ruth Cadbury MP warned the Government that the cost of living crisis meant that schools across the country were having to cut back on healthy items in school meals and use cheaper products. After a decade of underfunding many schools and colleges are struggling with the increased cost of energy bills and the rise in inflation to 9%.

In her question Ruth criticised the Government for saying this was a matter for schools who set their individual budgets, so she asked whether this was the ‘best the Government could serve up.’

‘‘It’s not fair that children across the country are at risk of missing out on crucial healthy meals because of the Government’s failure to tackle the cost-of-living crisis. The rising cost of heating, food and other costs for schools mean the Government need to do more.

Children should not be missing out on healthy meals, which play a crucial role in improving their learning and development.’’