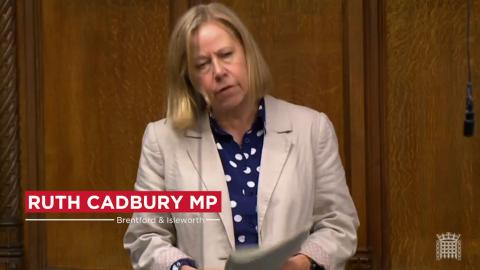 Speaking in Parliament Ruth Cadbury MP has condemned the Government for a decade of cuts to policing which saw a reduction after 2010 of 2,000 police officers in London, with around 70 fewer officers in Hounslow. In her question Ruth mentioned on-going cases of anti-social behaviour in Osterley, while warning the Government that a lack of resources for the police meant that officers could not carry out regular patrols in hot-spot areas.

‘‘Over the last decade we’ve seen the Government carry out sweeping cuts to frontline police forces across the country- including here in London where 2,000 officers were taken off the streets.

While the Mayor of London Sadiq Khan has put money back into frontline policing, cuts to the central government funding since 2010 meant that the Met Police were forced into making budget reductions of over £800 million.

People locally are concerned about crime- whether it’s car thefts, burglaries, domestic violence, muggings or assaults. While the Police along with Hounslow council are working hard to protect local residents they’re being let down by this out of touch Government.