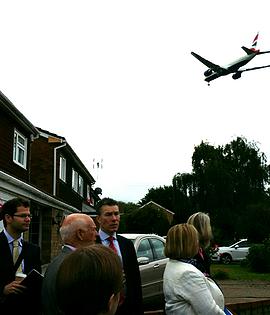 Ruth has written to the Prime Minister Theresa May and the Secretary of State for Transport Chris Grayling regarding the future decision on airport expansion.

In my constituency of Brentford and Isleworth and in the wider west London area, we already live in the noisiest and one of the most polluted parts of the UK. I want Heathrow to work to be a better neighbour, not a bigger one. I want to make it quite clear that I support Heathrow’s continued role as Britain’s premier world airport. Many thousands of local people work at Heathrow, it is a major driver to our local economy and is the reason so many more businesses locate locally.

However success has its costs, and these are felt most acutely by those living in our area, the noisiest in the UK and also the area with the greatest levels of traffic congestion and air pollution. Heathrow’s commitment to a ban on scheduled night flights for six and a half hours will be met with scepticism by local residents who too often suffer the breaches of night and day respite agreements. With a third runway, current day-time respite periods will be cut, and another 300,000 people will experience significantly more noise than they do at present. Whilst Heathrow says that noise levels will drop, they are basing this on a rapid fleet replacement which they cannot control. They also ignore the massive increase of noise for residents who will be living under the new westerly approach path.

In addition to the detrimental impact that a third runway would have on many of the people living near Heathrow, there are also much wider implications. A third runway would risk breaking air pollution levels as set out in the EU Air Pollution Directive which would have a negative impact on the already poor air quality in London and the surrounding areas.

With regards to the emphasis often placed on the importance of a third runway for the continuity of London’s ability to be a world class economy, I believe it is important for growth to be diversified through a larger area than just the region immediate to London. Heathrow’s arguments often focus on its need to expand to new long-haul markets, to serve the business community and to be a hub airport. Indeed, as less than a third of passengers travelling through Heathrow are business passengers, there is plenty of scope to specialise on the business market without needing to impose more noise and congestion on local residents. Many of the claims of economic benefit could be attributed to having an additional runway in the South East, irrespective of where it was to be built. I believe that the impact that a third runway at Heathrow would have on the lives of people who live in close proximity outweighs any potential economic benefits that may occur. It is my priority to ensure I represent the interests of my constituents and it is not my opinion that a third runway at Heathrow is in their best interests.’