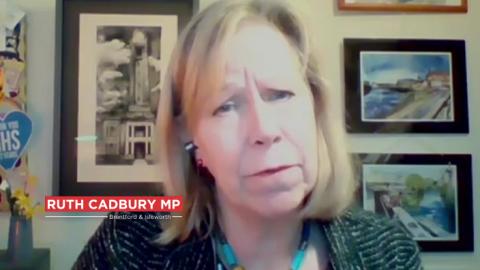 Speaking in a Commons debate about the impact that the coronavirus pandemic has had on the cultural sector on Tuesday (2nd March), Ruth Cadbury MP spoke about the huge impact on many of her constituents employed in arts, culture, and entertainment. She also mentioned the important role the cultural sector plays in our economy and national life. In her speech Ruth said,

"The arts and the creative sector isn’t only the Last Night at the Proms, Glastonbury and the west End theatres, or the pioneering and world leading TV and Film Industry. It’s also people such as those making music with toddlers, puppeteers working in museum education, staff of the now silent community arts centres,  it’s dancers and  photographers working with vulnerable young people, it’s pub bands and club comedians and many many more.  Our world famous culture stands on the shoulders of people such as these"

Ruth also criticised the Government over its failure to ensure that UK musicians could work and travel around the EU, after the Government failed to reach an agreement with the EU.

‘‘Our creative sector plays a huge role both for our local and national economy but also for communities across the country.

However, the pandemic has had a huge impact- with many people losing work, and others struggling facing an uncertain future. To add to this pain, many in the sector have been unable to access any support, due to the arbitrary and unfair restrictions placed on the furlough and self-employed support grants, and the budget has made little difference so those already excluded.

The Governments incompetence has also meant they failed to reach an EU wide agreement to allow UK musicians to tour, travel and work across the EU with ease. I know from listening to performers that this will have a huge impact.

The Government need to do much more to support the cultural sector, support those working in it, and ensure that it has the support it needs to continue to flourish in the future.’’