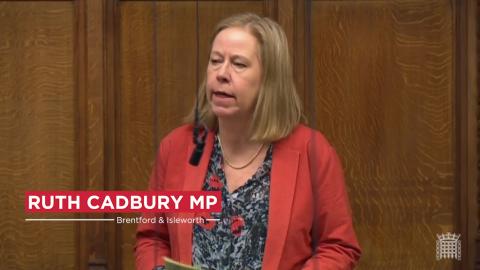 Speaking in Parliament during a debate bought by Leader of the Opposition Keir Starmer Ruth Cadbury labelled the actions of P&O ferries as the ‘most appalling abuse of British workers’ she had seen in her adult life, after 800 workers were dismissed without any notice.

Ruth said that this ‘‘did not happen in a vacuum’’ and told MPs that the Governments lack of actions to protect workers’ rights, including when British Airways threatened workers with the threat of fire and rehire, had shown that employers could get away with these tactics. Ruth also highlighted that ‘‘weak employment rights, weak enforcement, a loophole in the minimum wage legislation and insignificant penalties for breaking law—have all contributed to this nationally embarrassing scandal.’’

Ruth also accused the Government of offering ‘crocodile tears’ and warned that a failure to stand up against these tactics would shift the dial back on employment rights and see other companies use these tactics against their workforce in the future.

‘‘The treatment of the P&O seafarers last week was absolutely appalling. It was simply wrong for 800 experienced and skilled crewmembers to be laid off with no warning.

It is equally shocking that the Government knew about this in advance, yet refused to act. This is not the first time that British companies have laid off workers and replaced them with poorly paid, insecure agency staff. I warned the Government back in June 2020 that they needed to outlaw these so called ‘fire and rehire’ tactics, after we saw British Airways threaten their workforce. Rather than listening the Government sat on their hands and we’ve seen the consequences of that with P&O.

I will continue to campaign for the Government to protect the rights of workers and stand up against these awful tactics.’’