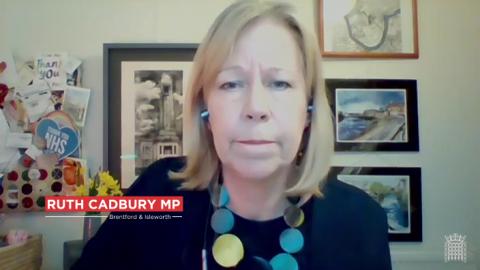 Ruth Cadbury MP has blasted the Government for a Budget that ‘offers nothing’ to hard working NHS and social care staff, after the Government offered only a 1% pay raise for NHS staff, while cutting spending on health and social care. In her speech delivered virtually to the House of Commons Ruth pointed out that 1% equates to a real terms pay cut due to inflation. Ruth also criticised the Government for failing to do anything on Social Care and highlighted the personal impact that this has had on her constituents locally.

In her speech Ruth also mentioned the lack of ‘a bold, ambitious and sustainable’ plan around climate change and criticised the Chancellor for cutting funding from the Green Homes grant, which she said would have ensure work for small and local businesses.

Ruth also criticised the Government for its continued failure to support aviation communities like Hounslow, which she said have ‘been so badly hit’ by the coronavirus pandemic. She pointed out that other countries like France, Germany, the US and Spain have provided sector support for their aviation industry and its workforce.

Finishing her speech Ruth labelled the Government as one that ‘neither meets the challenge of the moment we are in, nor plans for the future’ and criticised the Government for rewarding ‘political friends’.

‘‘The coronavirus pandemic has had a huge impact on our local community, whether that’s families losing loved ones, people being made redundant or local businesses being forced to close.

However, this Budget failed to rise to the challenge of this moment and failed to show how the Government is going to build back a better vision for society after this pandemic.

From the failure to give NHS staff the fair pay they deserve, to the failure to tackle long term and growing injustices like child poverty, or the housing crisis, it’s clear that this Government still isn’t doing enough to tackle the problems impacting residents across Hounslow, and across the UK.’’